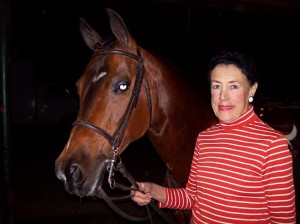 The horse family was deeply saddened to hear of the loss of Patricia DeVore Wyatt of West End, NC on October 12, 2012. Pat was a consummate artist of animals and their owners with portraits all over the country, including thirteen hanging in the Morgan Museum in Middlebury, VT. Pat was also a show horse exhibitor and breeder with world champions in both the Hackney and Morgan breeds.

Pat was very athletic and sports minded from childhood and enjoyed playing ball with her brothers. She also was extremely artistic from an early age. Pat studied classical music for years, but opted to devote her boundless talents to her art. She graduated from Miami University of Ohio with a degree in Fine Art. Some of her early art work included being the art director of a printing company, interior design for Ethan Allen and creating cards for Hallmark. The American Kennel Club chose Pat to do drawings of various dog breeds as part of their judging standards handbook. 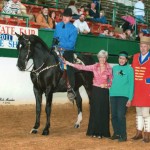 Her forte’ was depicting horses and their riders and drivers. Her inimitable artistic eye and flair resulted in many treasured masterpieces. Pat painted other pets as well. One dog portrait caused one who saw it to say “You want to reach out and pet it.” Her artistic ability was not limited to animals. She did impressionistic paintings which could be hung in the Louvre, as well as realistic bird prints in the Ducks Unlimited style. For fun, she “doodled” stacks of watercolor landscapes. Pat’s house was like an art museum filled with her paintings and the equine bronzes she loved to collect. Her art was often designed for the program covers of big-time horse shows including the Southern States Regional Morgan Horse Show from 1995 to 2012, Eastern States and Children’s Services Horse Show and Country Fair. 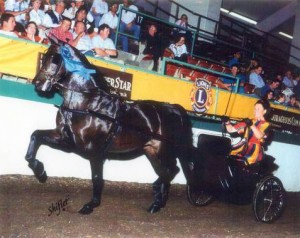 Pat started showing Saddlebreds early on and showed all over Kentucky and Ohio. When she and Jim were married, they established their Fox Ridge Farms in Canton, CT, where they bred and showed world class Morgans. One of Pat’s favorites was FRF Celebrity, Morgan Two Year Old Pleasure Driving World Champion. Others included Fox Ridge Command and Fox Ridge Centaur shown with Woody Henry. Pat and Jim also had Hackneys with Rodney Root and Gib Marcucci, including World Champion Junior Cob Tail Pony Reedann’s Fleet Admiral. Both Root and Marcucci remembered her as “meticulous and wanting every detail just right.” Later Dick and Rick Cicero trained her Hackneys.

When Pat moved to Pinehurst, NC, she expanded her horse interests to include carriage driving. She was a member of the Moore County Driving Club and Central Carolina Driving Club. One of her fondest memories was driving her Fox Ridge Calypso through the streets of Pinehurst in the presentation class of the Carriage Classic in the Pines. 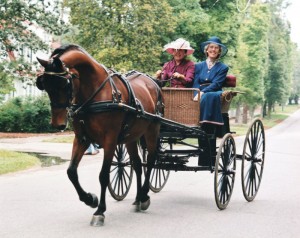 One friend said that Pat “loved all aspects of horses,” and this included the hands-on care of the horses in her own barn. She cleaned stalls, carried feed bags and bales of hay and groomed her retired horses on a daily basis. She also enjoyed trail rides around her acreage. In fact, she had just finished her daily barn chores and returned to the house on the day of her death.

Other interests included reading, playing bridge and eating out with her many friends in Pinehurst. She loved to go to antique stores in search of just the right collectible to add to her vast collections. Pat was also a history buff and member of the Moore County Civil War Round Table.

Tributes to Patricia DeVore Wyatt’s memory may be made to Animal Advocates of Moore County, your breed organization, or your local animal rescue organization.

Please send any news items, photos or event information to our Newsletter Editor